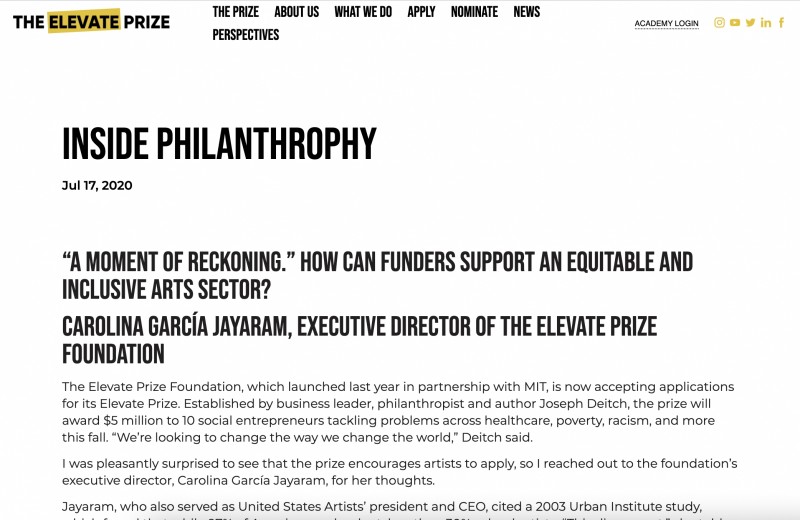 “A Moment of Reckoning.” How Can Funders Support an Equitable and Inclusive Arts Sector?

The Elevate Prize Foundation, which launched last year in partnership with MIT, is now accepting applications for its Elevate Prize. Established by business leader, philanthropist and author Joseph Deitch, the prize will award $5 million to 10 social entrepreneurs tackling problems across healthcare, poverty, racism, and more this fall. “We’re looking to change the way we change the world,” Deitch said.

I was pleasantly surprised to see that the prize encourages artists to apply, so I reached out to the foundation’s executive director, Carolina García Jayaram, for her thoughts.

Jayaram, who also served as United States Artists’ president and CEO, cited a 2003 Urban Institute study, which found that while 97% of Americans valued art, less than 30% valued artists. “This disconnect,” she told me, “is exacerbated by a philanthropic model that supports institutions over individuals and promotes the flawed notion that without traditional measurement and data, artists can’t be impactful, so are somehow suspect and unworthy.”

Money, to be sure, is critical, but so is “the vote of confidence from the foundation sector,” Jayaram said. “I want to take this notion one step further with the Elevate Prize, by making the important and often overlooked link between artists and social impact leaders to show they are often one and the same. Without artists and their unique perspectives and contributions, our goal to elevate the human experience for all cannot be fully realized.”