Sehat Kahani: Forging a Future for Female Physicians in Pakistan 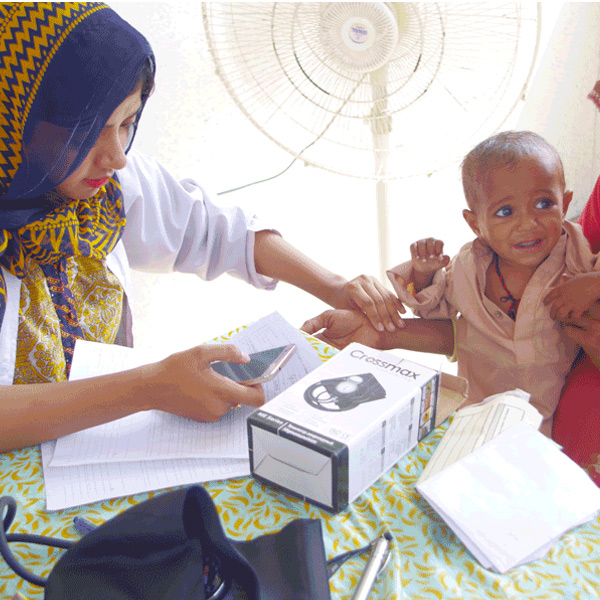 In Pakistan, as much as 60% of the population does not have access to healthcare, but Dr. Iffat Zafar, COO and co-founder of Sehat Kahani, along with her co-founder and CEO Dr. Sara Saeed Khurram and their team of female physicians have found an unexpected solution to both the challenges of healthcare access and the so-called Doctor Bride Phenomenon, where some 50% of female doctors give up practicing medicine when they get married or start a family.

“I was one of those crazy people who always wanted to be a doctor. I was on top of the moon when I got into medical school,” says Iffat. “I was always very ambitious. But as we started to move towards graduation, a lot of women got married and they started to drop off from their careers. Even women who were exceptional in their studies — practicing as a physician was no longer their priority anymore. I was lucky because my family and my husband were supportive of me working. But then something happened: I ended up losing my first baby in premature birth. Society has built this emotional guilt into women, so I thought, ‘It’s because you’re working, that’s why.’ My office didn’t have a lift. You know, having to climb the stairs…  so immediately after I conceived again, I quit and I took a year off — and I didn’t know whether I would go back to medicine again.”

That’s where Sehat Kahani comes in.

Sehat Kahani connects over 5,000 home-based female doctors to over three million patients who can’t access a doctor in person, via e-clinics and a telemedicine app.

“In the early days people were apprehensive about using telemedicine. They worried that there was some weird agenda, so we had to spend a lot of time in communities talking with people, demonstrating how it works, and building confidence. Then we were able to scale into more rural communities through a network of 35 e-health centers, and in 2019 we developed a mobile app to enable people to access physicians through their smartphones.”

Though local communities may have taken a little convincing, doctors did not. “They were looking for something like this. And that resonates with me. You put in so much effort to be a doctor, and you want to practice. Plus, you’re always getting calls from friends wanting your opinion, so you’re used to helping people on the phone, or by message — it’s better to formalize and monetize it.”

As Covid-19 forced families into lockdown and people became more concerned about going to hospitals and health centers, telemedicine boomed and Sehat Kahani was ready to serve this increased demand. “We went from 50 consultations a day on the app 2019 to 700–900 consultations a day in 2020. People in Pakistan and people abroad started to use our app. US UK, even India.” To date, the company has successfully conducted 470,000 online consultations, and created access for 2.5 million people through its retail as well as its corporate version. The organization also partnered with the government on an outreach campaign through the Digital Pakistan Initiative (with an opportunity to meet the President of Pakistan, himself a physician).

Not that growth came without issues; “While we were treating so many patients through both the e-health clinics as well as the mobile app we’d also get some appointments by men who would try to harass our physicians. Now, we have a complete safety management protocol and if people don’t behave appropriately, they can get blocked,” says Iffat.

Along the journey, ingrained discrimination has brought challenges for the company, internally and externally. “When we wanted to hire a finance manager, we only had men apply,” Iffat notes. “We had to advertise a second time asking specifically for women, and then we had a lot of great candidates. We asked the woman we employed why she didn’t apply the first time, and she said she thought we only wanted a man. That’s a problem. Women internalize the stigma that builds up over their lifetimes, and they think, this is not for me. Then there are men who don’t understand this new way of doing things. I brought my daughter into the office one day, and the man I was meeting with was rolling his eyes and judging, what is that child doing here? — in my own office!”

“I’m proud to be a mother to two daughters,” says Iffat. “I aspire for them to do a lot of good in life.”

And she has some tips for them — and for us — to drive progress.

“I’m an introvert, but over time I have learned to survive in an extrovert world. You have to stand up for yourself and for what you want to do. Even if you’re not the one who is all out there, you can still be confident, ambitious and do things. It’s important to take ownership — personally, professionally, and move beyond the challenges.”

“Both me and my co-founder are women. We’re the same age. We both have daughters. We understand each other’s issues, and we can empower each other — and the women physicians who work with us too.”

Forge Your own Path

“Women need to be their own bosses, come out of their own shell, create their own paths. It’s 100% possible. You won’t know everything on the first day, but over time, with experience, you learn.”